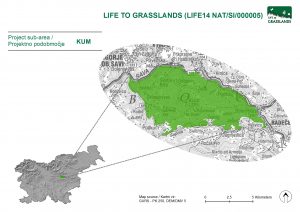 The project sub-area of Kum comprises the central part of the Sava Hills, where the area of hills between the Sava River and the Sopota River ascends to the 1,220 metres high Kum Mountain with its distinct peak. The Triassic dolomite and limestone give the area its diverse Karst character with numerous sinkholes, chasms, rocky surfaces and rocky cliffs. Over the edge of the mountains, the narrow valleys of the Sava and Sopota Rivers and the Šklendrovec Spring can be found.

Less favourable natural conditions of the Karst world and relief are represented also in the use of space and the settlement of the area. The man-made environment that has always been maintained by humans with their work is changing due to economic and social movements. With that, the diversity of areas and the diversity of plants and animals are also changing.

In the areas with low population, smaller settlements and dispersed farms prevail, surrounded by the old tall-tree orchards. Nearly 80% of the area is covered with forest, in which the beech tree is dominant. Only the small surfaces of the fields at the bottom of sinkholes are intensively cultivated as well as the grasslands with tall oat-grass (Arrhenatherum elatius) on more flat ground. On the steep unforested slopes, the extensive and mostly manually mown dry grasslands with Upright Brome (Bromopsis erecta) prevail. Many grasslands are being overgrown due to the abandonment of agricultural use. With that, the status of the dry grasslands is deteriorating as well. The latter are priority habitat type 6210(*) Semi-natural dry grasslands and scrubland facies on calcareous substrates (Festuco Brometalia) (*important orchid sites). The status of plant and animal species connected to the dry grasslands is also worsening. In the better preserved dry grasslands, species that are typical of those sites can be found there: several types of the Dianthus and Orchidaceae species, e.g. the frog orchid (Coeloglossum viride), Viola alpestris, Gentianella anisodonta, Scabiosa hladnikiana, the Squarrose Knapweed (Centaurea triumfettii) and all three types of lilies: the Carniolan lily (Lilium carniolicum), the Turk’s cap lilylanguage (Lilium martagon) and the Tiger lily (Lilium bulbiferum). The diversity of the grasslands habitats can be seen in the diversity of animal species, where butterflies prevail, such as the Apollo butterfly (Parnassius apollo), the Clouded Apollo (Parnassius mnemosyne), the woodland brown (Lopinga achine), the scarce fritillary (Euphydryas maturna), the large blue butterfly (Maculinea arion) and the marsh fritillary (Euphydryas aurinia).