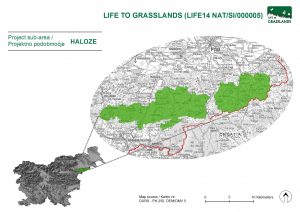 From a natural as well as social and economic perspective, Haloze is an incredibly diverse landscape in the North East of Slovenia. The land of the low tertiary hills measures 241 km2 and has one of the most diverse reliefs in Slovenia. The altitudes reach up to 600 metres above sea level. The agricultural and nature conservation practices are strongly determined by the steep slopes, ranging from 6 to 30 degrees, in the Western Haloze.

In the past, Haloze used to be known particularly for its excellent wine growing regions. This is where the second name for Eastern Haloze originates – Wine Growing Haloze. Western Haloze is covered by predominantly beech forests, inside which maple forests appear on the slopes of gravel in a mosaic-like pattern. More than 68% is forest surface, therefore it is also known as Forested Haloze.

The segmented relief of Haloze has never allowed for large rounded agricultural plots of land, therefore they have been shaped in the form of solitary farms (‘celeks’) or in the form of winegrowing plots of land. Natural conditions, and sadly even social, retain the precious image of the extensive man-made environment of Haloze. On the other hand, they are also the reason for the existence of threats in the areas of priority habitat types, such as the abandonment of use, the process of overgrowth, the inappropriate use and fragmentation as well as low awareness.

Haloze represents one of the most important dry grasslands on carbonate soil with a high level of biological diversity in Slovenia. The grasslands on calcareous substrates are the richest plant communities in Europe (up to 80 plant species per square metre), which is the basis for the diversity of arthropods and birds related to the grassland habitats. It is one of two Slovenian Natura 2000 areas that have been determined for the priority qualifying species of an orchid – the Adriatic lizard orchid (Himantoglossum adriaticum).

The traditional man-made environment, which is closely linked with human activity, has a special meaning for the biodiversity. The diversity of species of the grasslands, both wet and dry, is enabled by their traditional use: regular but not intensive mowing, no fertilisation, grazing and grassland orchards.

The main goal of the project is the revitalisation of overgrowing and overgrown dry grasslands and the establishment of the appropriate use of revitalised surfaces and other grasslands that have been previously inappropriately used with the purpose of preserving the habitat type 6210(*) and the species connected to it (mostly orchids). At the same time, conditions for greater biological diversity will be created on the basis of specific microhabitats connected to the various grassland structures (pasture, mown grassland, hay field orchard).

As a result of the project, an increase of the priority habitat and the habitats of the target species is expected. The improvement or revitalisation of the structure of dry grasslands and the biodiversity of the project area is also expected.