Grasslands have become their own ecosystems, i.e. some of the busiest and most diverse areas, where it is possible to find 80 different plant and animal species in only a square metre of grassland. We are talking about the most biologically diverse agricultural landscape and at the same time about one of the most endangered habitats with the largest decline of biodiversity. It is threatened both by the abandonment of agricultural activity as well as excessive input of nutrients and intensification of use. According to the report of the Habitats Directive, for which Slovenia (like other EU member states) is required to report, it was proved that the state of Slovenian grasslands is very poor and in this regard Slovenia has identified areas of environmentally sensitive permanent grassland. Farmers are not allowed to change or plough these areas.

Along with wetlands, the extensive grasslands belong to the most endangered ecosystems in Europe, as their existence is dependent upon sustainable, moderate use, which in terms of market economy usually does not provide enough profit to the owners of such land. Therefore, grasslands usage is either intensified through fertilisation, early mowing or grazing or they are abandoned and gradually become overgrown. In both cases, the number of grassland plants and animals decreases greatly and the image of the landscape changes. Because the extensive grasslands are the basis for quality and healthy food products, competitiveness needs to be reached by acknowledging this quality that also considers the actual value of costs.

Dry grasslands are characterised by grasses and wild flowers growing on shallow and nutrient-poor soils with low and sparse turf. Created by man, they are still being maintained by moderate mowing or grazing, while many farmers combine both. Old varieties of fruit trees were often planted on such grasslands. Therefore, they can also be found in meadow orchards.

Where to find dry grasslands in Slovenia?

In Slovenia, dry grasslands are found in permeable karst landscapes and in hinterlands, where they grow on sunny southern sides of slopes and hills. Experts call this type of grasslands semi-natural dry grasslands and scrubland facies on calcareous substrates (Festuco-Brometalia) (*important orchid sites). In eastern Slovenia they can be found in the hilly areas of eastern (wine-growing) and western Haloze, Donačka mountain and in the Posavje hills with its highest peak Kum. Smaller areas of dry and semi-dry grasslands (so-called meadows) with rich biodiversity are located in the middle of wooded Gorjanci with the plateau Radoha. They can also be found in Goričko, Kozjansko, Bela Krajina, the Polhograjsko hills and elsewhere. Dry grasslands are among the most endangered habitats in Slovenia.

They are a treasure trove of plants, including wild orchids and different animals 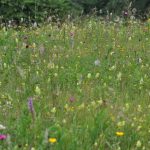 Dry grasslands are characterised by a rich diversity of plant and animal life; up to 80 different species can be found in an area of one square metre. Some of them are protected and endangered. The greatest diversity of species is in moderately or extensively used grasslands. Typical and easily identifiable plants growing on dry grasslands are grasses (erect brome, tor-grass and quaking-grass) and thermophilous herb species (common sainfoin, ox-eye, cloves or carnations, silver thistle, hoary plantain, rattle, Carnolian lily). Meadow pearls (wild orchids) bloom in May and June. The rich diversity of plant life provides a favourable environment for a large variety of insects, butterflies, grasshoppers, bugs, praying mantis, and beetles. Due to the rich diversity of insects, many bird species are also found in dry grasslands.

Why are dry grasslands under threat? 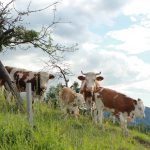 According to old sources, dry grasslands were once widespread, but after the agricultural revolution in the 20th century, the situation changed drastically. Livestock breeding was the main reason for the creation of grasslands; due to the increase in population density an ever growing need for the production of food (meat, milk) and animal feed arose, and deforestation was thus being encouraged. In the last 50 years, a decline of grassland systems in both Europe and Slovenia has been noted.

Dry grasslands are threatened by abandonment (mowing, grazing) and consequent overgrowing. The population in these areas is aging, the young are emigrating, and there are fewer and fewer people who work the land. However, early and frequent mowing, overgrazing and over-fertilisation also change the diverse dry grasslands.

Hardworking and tenacious farmers, whose work is often insufficiently appreciated and respected, play a key role in the preservation of dry grasslands. Dry grasslands are a habitat for many plant and animal species (even rare and endangered), therefore their preservation is very important in maintaining the natural balance and a healthy environment.

More information on grasslands can be found in the publication of Karin Gabrovšek, MSc: Ljudje z naravo, narava za ljudi – biotska pestrost je naše življenje; Zavod RS za varstvo narave, 2010 (People with Nature, Nature for People – Biodiversity is Our Life; The Institute of the Republic of Slovenia for Nature Conservation, 2010).