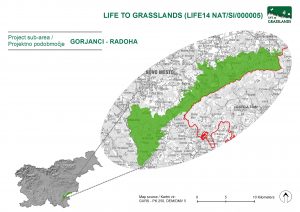 The priority habitat type addressed by the project:

Gorjanci are plateau-like, predominantly wooded hills in South Eastern Slovenia, stretching from the Črmošnjiška Valley in the West to the state border with Croatia on the Sava River near Brežice. In the North, the Gorjanci Hills steeply descend to the Krško plain and in the South they gradually descend to the White Carniola and Karlovec basin. The stratification of the surface is typical of the Gorjanci Hills, which is the consequence of being heavily influenced by Karst features and the great erosion power of the water courses.

Because of the unfavourable relief conditions, the landscape is sparsely populated. The vast majority of settlements are situated by the foot of the Gorjanci Hills at altitudes that measure up to 300 metres, the only exceptions being Javorovica (550 metres) and Planina in Podbočje (a little less than 700 metres). The Slovenian part of the Gorjanci massif (state border with Croatia goes along the ridge) measures 212 km2, whereas the altitudes range from 140 metres in the lowlands to 1178 metres, which is the height of Trdina Peak in the Gorjanci Hills.

Due to the demanding natural conditions and the extensive management with mown grasslands in the past, the priority habitat type of extensive grasslands has developed on them. The farms are situated in settlements by the foot of Gorjanci Hills, therefore the areas of priority habitat types that are generally at higher elevation in the Gorjanci Hills are rapidly being abandoned. The surfaces are becoming distinctly overgrown and the owners are no longer interested in any form of operation in the area of mown grasslands.

The use of forests is prevailing. Grasslands (or mown grasslands) appear inside the forests in the form of dispersed islands. The larger retained complexes of mown grasslands include Rute, Miklavž and Javornica, while around them individual smaller plots of grasslands can be found. The vineyards are connected mostly to the foot of the massif and are situated in the immediate vicinity of settlements.

In addition to the abandonment of use, the popularity of the Gorjanci Hills for all kinds of recreation also represents a specific threat. It is a very popular area for hikers and cyclists, gatherers of forest fruits and other fruits and lately also for the fans of other more ‘invasive’ forms of recreation (driving motorised vehicles and four-wheelers).

The unique man-made environment, shaped by man for centuries, is changing quickly due to different social conditions. The diversity of species of the dry grasslands is enabled only by their traditional use. In practice, this means extensive mowing every year and management without fertilising the land. For the past decades, grazing has not been typical for the Gorjanci region. Despite that, it remains a very attractive possibility for long-term grasslands maintenance.