Results of the project

The main objective of the project LIFE TO GRASSLANDS was the improvement of the conservation status of dry grasslands in Eastern Slovenia through overgrowth removal and establishment of appropriate long-term use of dry grassland. Two project targeted priority habitat types were: Semi-natural dry grasslands and scrubland facies on calcareous substrates (Festuco-Brometalia) ((* important orchid sites) (EU_6210(*)) and Species-rich Nardus grasslands, on silicious substrates in mountain areas (and submountain areas in Continental Europe) (EU_6230(*)). The project area consisted of four project sub-areas: Haloze, Gorjanci Kum and Pohorje.

The project was concretization and upgrading of the existing system of management of dry grassland in Slovenia through Natura 2000 Management Programme for Slovenia (2015-2020). It led to dissemination of good practice examples in the field of active management of Natura 2000 sites in Slovenia as well as elsewhere in central European region.

Preparatory action A.1 – Analysis of the initial situation of the agricultural use of dry grasslands and Action A.2 – Elaboration of the Conservation guidelines for sustainable management of HT 6210(*)/6230(*) in the project areas,  A.3-involvement of landowners in the project identification of areas for action implementation and A.4-Permit procedures have been successfully completed.

Conservation guidelines for sustainable management of HT 6210(*) and 6230(*) were prepared for all four project sub-areas (Action A.2) by CB ZRSVN. Conservation guidelines were prepared using a participatory approach, involving experts, partners and relevant stakeholders. Overall, 15 preparatory and communication workshops were organised in Action A.2.

Altogether 7.533 initial or additional information about the progress of the project, were sent to different home and e-mail addresses. Until now, project staff carried out 1.200 farm visits (Action A.3).

In order to ensure a long-term sustainable multi-functional management of dry grasslands with grazing, late mowing and restoration of traditional orchard, we provided farmers with free usage of project equipment for grazing, mowing and mulching as well as with seedlings of traditional tall fruit tree varieties. We also provide removal of overgrowth and rejuvenation pruning of old fruit trees.

With the aim to ensure long-term sustainable management of the dry grasslands, we purchased or leased 27 ha
of abandoned land in Haloze and 2.3 ha in Gorjanci (Action B.1 nad B.2).

With the considerable effort from the project staff, through the involvement of farmers in the project’s activities and Agreements with farmers and landowners on inclusion in the project activities we managed to sign 164 Agreements with farmers and landowners (Haloze 100, Kum 30, Gorjanci 18 in Pohorje 16). With them we managed to ensure sustainable long term management of dry grasslands on 688 ha of dry grasslands, thus exceeding the initial target of 517 ha.

In the autumn of 2017, we began with the removal of overgrowth. We removed the overgrowth on 16 ha on Gorjanci, 47 ha in Haloze, 20 ha on Kum and 53 ha on Pohorje subareas. In total we removed overgrowth on more than 136 ha of grasslands (Action C.1).

We carried out 23 volunteer nature conservation actions for removal of overgrowth (Action C.1).

We carried out public calls for the purchase of pasture and grazing equipment,  trailers for transport of livestock. The project equipment is, in accordance with the signed Agreements, supplied to farmers on Haloze, Kum, and Pohorje project subareas. With the aim to ensure long-term sustainable late mowing and grazing management,
we gave the farmers, free use over 110 km of cattle and sheep fences and 6 trailers for moving livestock between pastures. (Action C.2 – Ensuring the appropriate long-term use of dry grasslands).

Through the signed agreements we ensured the planting of 41 ha of new tall tree meadow orchards and the restoration of 44 ha of existing tall tree meadow orchards. The farmers received over 3500 saplings of old varieties of tall tree orchard fruit trees (which were for this purpose prepared by the external subcontractor Kartuzija Pleterje), in addition more than 780 old orchard trees were pruned. We also organised 15 workshops, where farmers learned the art of pruning the tall tree orchard trees and 10 volunteer actions of sapling planting, with a demonstration of a proper planting method (Action C. 3 – The restoration and maintenance of traditional orchards).

PRJ HALO subcontracted Arhides d.o.o. to construct the web portal providing basic information about the project, its partners, LIFE mechanism and Natura 2000 as well as constant update on project development. The portal connects landowners, farmers and other interest groups in Haloze region. The web portal is functional since end of April 2017. It is available on web page: http://www.travisca.haloze.org/ (Action C.4) .

Farm Management Plans for 49 interested farms were prepared, with the main objective to enable the farms
economically viable farming taking into consideration the extensive, use of species-rich grassland (Action C.5 – Preparation of farm management plans for improving dry grasslands management).

We prepared a harmonised expert proposal of the results-based agri-environmental measures for dry grasslands. This is the first proposal of results-based agri-environmental measures in Slovenia. We presented the proposed measure to the Ministry of the Environment and Spatial Planning, the Ministry of Agriculture, Forestry and Food, the Agency for Agricultural Markets and Rural Development and the Agriculture and Forestry Chamber
of Slovenia as well as at other international events. The project also involved training for farmers to recognise the indicative species and fill out field survey forms. With the support from the project, the Result based payments network – “RBP network” – https://www. rbpnetwork.eu/  website was created. Several approaches of the results-based schemes from EU countries are presented on the website. The opinions of farmers included in the RBP-schemes are also included (Action C.6 – Preparation of an Expert Proposal for AEP measures related to the preservation of the HT 6210(*) and 6230(*)).

In the scope of the development of economic study for Haloze, we prepared all the necessary documentation
to establish a collective brand “S haloških bregov/lazov” (“From the slopes of Haloze”), with the purpose of
promoting the production and processing of the products from dry grasslands and tall tree meadow orchards.
These include produce (milk, meat, fruits, herbs, honey) and products (food and craftwork) from farms
extensively managing dry grasslands of Haloze with the aim of their long term conservation. On other three sub-areas we organized workshops to transfer the knowledge from Haloze experience (Action C.7).

External subcontractor, University of Ljubljana, Faculty of Arts, Department of Geography, prepared a report of the Assessment of the socio-economic impact of the project actions on the local economy and population in two phases, comparing socio-economic situation at the beginning and at the end of the project (Action D.2).

External subcontractor, Iskriva, Institute for Development of Local Potentials, prepared an Assessment of the project’s impact on the ecosystem functions at the beginning and at the end of the project (Action D.3).

We set up 5 interpretation points or paths (2 Haloze, 1 Kum, 1 Gorjanci and 1 Pohorje) for the purpose of education. They will continue to raise awareness of the importance of dry grasslands and the legacy of the project (Akcija E.4).

The project web page is up and running www.lifetograsslands.si and http://www.travisca.haloze.org/ in Slovene with English and Croatian subpage. With project graphic identity and logo we uniformed all project promotional material. Due to strict use of project logo in combination with LIFE and Natura 2000 logo project is easily recognizable as well as contribution of the LIFE program and connection to Natura 2000 areas, which is important for the general public’s environmental and nature protection awareness (Action E.5).

Awareness raising, education of young people and training/seminar for school and educational staff are implemented according to the time plan. In the project, we have prepared:

Project staff organized more than 30 events (presentations, workshops or nature science days in the field) for children and teachers. More than 1,000 children and more than 100 teachers participated in project events. The Institute of the Republic of Slovenia for Nature Conservation has prepared an educational programme for teachers “Suha travišča kot model za pouk spoznavanja okolja, naravoslovja in biologije”, which is available at http://www.lifetograsslands.si/rezultati-projekta/publikacije/. The program was enrolled in the National Catalog of Additional Educational Programs and Training for Educational Workers (KATIS) at the Ministry of Education, Science and Sport. Successful integration of “dry meadows as a sample for learning about environmental and biology”, into official national education programs, is a great achievement for the project (Action E.6).

We have established and equipped three info rooms,  at Haloze, Gorjanci and Pohorje project areas, and one project grasslands classroom in Kum (Action E.7 – Equipment for setting up project info rooms in Haloze, Pohorje, Gorjanci and Kum). The purpose of the establishment info rooms is to inform the national, local and general public about the importance of dry grasslands, habitats and species, as well as the promotion of Natura 2000, the project LIFE TO GRASSLANDS and LIFE financial mechanism. Various presentations and workshops are already being implemented in the established info rooms and classroom.

The international conference titled “Challenges and opportunities in multifunctional management of grasslands” was held between 15. and 17. of May, within the project LIFE TO GRASSLANDS. The purpose of the conference was to encourage long term multifunctional grassland management, networking of experts and to exchange knowledge and experience about sustainable grassland management, including all the challenges of modern farm practises. Over 130 people from 6 countries attended the conference.

On September 17, as part of the project, we organized the final meeting of the LIFE TO GRASSLANDS project at the Grand Hotel Primus in Ptuj. The meeting took place in two main sections, morning and afternoon, with an interim press conference. The event was attended by 85 participants. The event was organized in accordance with the instructions of the NIJZ for the prevention of the spread of COVID-19 disease. 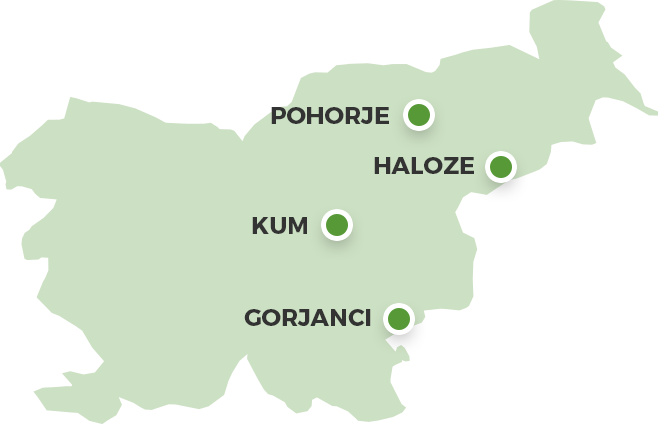